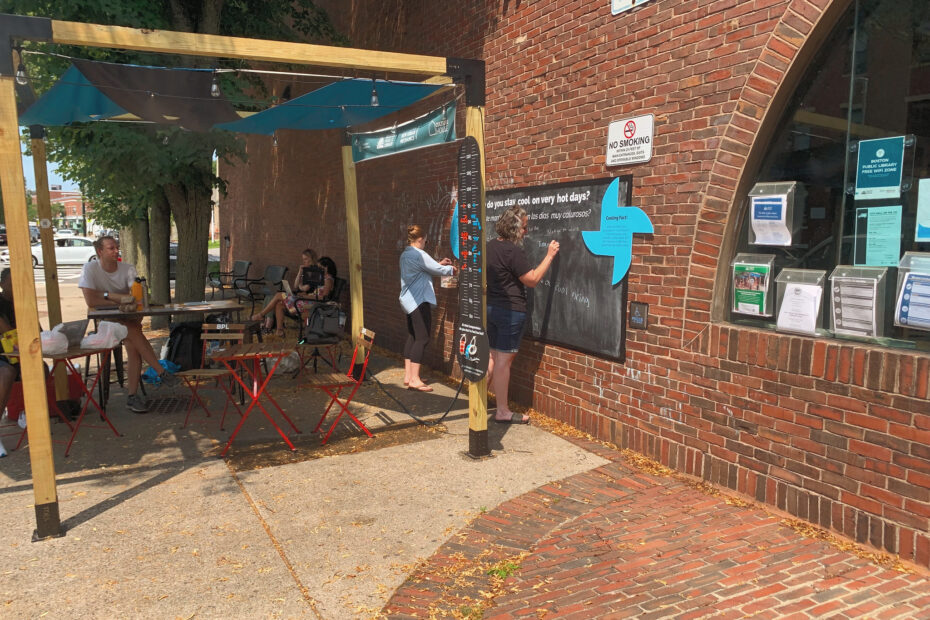 As part of a cohort of community-based organizations in the Greater Boston area, we advised the MAPC Metro Mayors Heat Prep Committee on strategies for keeping communities cool during heat waves. With temperatures rising in urban areas due to climate change, it’s critical that cities are prepared with strategies for resilience. When the final report (“Keeping Metro Boston Cool: A Regional Heat Preparedness and Adaptation Plan”) is finished, it will provide a clear roadmap that municipalities can use to ensure future heat waves do not catch them off guard. As part of our work with MAPC on this plan, we conducted engagement activities and provided guidance on the final report.

In July 2021, we hosted a pop-up engagement at the Codman Square branch of the Boston Public Library where we collected information on how community members keep cool in hot weather. We hosted the pop-up in the outdoor work/learn space we created with the BPL earlier in the summer. We brought water misters and popsicles to create a cool oasis during the engagement!

After hearing from the community, we advised MAPC on their final report for the Metro Mayors Heat Prep Committee. Much of our advice centered around the need for social infrastructure to create strong community ties that build resilience. Research has shown that neighborhoods with better access to public space fare better during heat waves and other crises because neighbors are better-connected and therefore check up on each other. The final report is expected to be released soon. We also participated in a webinar highlighting the paper’s recommendations which you can watch below.